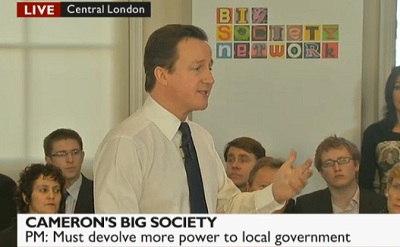 And is EdM right: This is re-contaminating the Tory brand?

Ever since the “Big Society” concept was launched by Dave during the election campaign I’ve been a sceptic simply because nobody is really clear what it means.

Well we are about a year into it now and Cameron’s staged another re-launch to keep the initiative going.

After one U-turn after another on policy issues, the forests being the latest, I just wonder what Cameron’s refusal to quietly drop this one says about him. For the BS is so personal to him and there’s a stubbornest about his personality that is coming out here. With other U-turns the original decisions have been by ministers – BS is 100% Cameron.

Inevitably at a time of cutbacks this can be portrayed as a way of trying to sweeten the pill. I thought EdM ‘s comments that this was about “re-contaminating the Tory brand” was quite smart. It’s certainly going to resonate more than TUC chief Brendan Barber’s comments that the BS is about turning Britain into Somalia where “the state barely exists”.

One thing’s for sure – Dave’s going to go on and what’s the betting that we have another re-launch in a few months time?