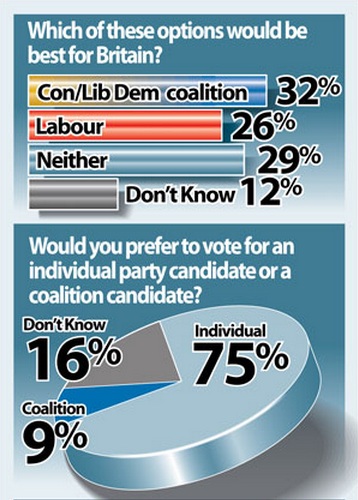 But what does this new format really mean?

There’s a new ICM poll reported in today’s News of the World (Â£) which does not apparently include a voting intention question. Instead the phone pollster asked a sample of 2,036 which of these would be best for Britain – Con/Lib Dem coalition (32%); Labour (26%); Neither (29%); Don’t know (12%).

This has not been asked before in this format so we have nothing to compare it with – though in the context of some current voting intention polling it looks a bit out of line. However last week’s ICM poll for the Guardian had C35%: L39%; LD 15%.

In his first PB column last month the former head of polling at ICM, Nick Sparrow, made this point about today’s political environment and current polling:-

“…Nevertheless, respondents are asked to choose between four discreet alternatives pretty much on the spot (Conservatives, or Labour, or the Liberal Democrats or another party). The question thus assumes that, at a stroke, the coalition has been formally wound up, or breaks down, that all the main parties have already gone their separate ways and have campaigned on different manifestos for votes in an election campaign ending tomorrow.

It can be argued that the old vote intention question has been made redundant (perhaps temporarily) by the establishment of the coalition simply because it asks about four alternatives at a time when respondents can only really choose â€“ or realistically imagine a choice – between three, â€œthis lotâ€ â€œthe other lotâ€ or one of the minor parties..”

No doubt coalition-backers will be delighted with the NOTW numbers.

I’ll be happier about the poll when we’ve had chance to look at the detail. That should be out tomorrow.