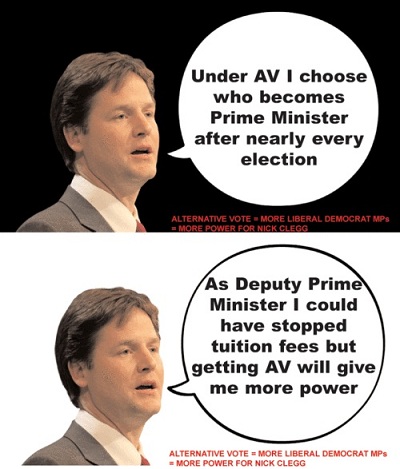 Is putting the emphasis on Clegg the right approach?

Tim Montgomerie, originator of the above poster concepts and editor of the Michael Ashcroft-owned Conservativehome beleives that the best way to stop AV being introduced is for the NO camp to put the focus on Nick Clegg.

He writes:“… A model is the defeat of the Maastricht Treaty in France in 1992. Maastricht wasn’t rejected because the French people had turned against the European project but because President Mitterrand was hated.

The posters …are probably too wordy but they capture the sort of campaign that might defeat AV. It shouldn’t be too personal but it should underline how Nick Clegg – Britain’s least popular political leader – and the Liberal Democrats – Britain’s fastest slumping party – would benefit from AV and routinely become the kingmakers in British politics. As one Cabinet minister said to me yesterday; under AV the losers win.”

Quite how Mr. Cameron would respond to such an approach is hard to say but I can hardly think that he would be supportive.

The trouble with the Montgomerie plan is that it represents a very Conservativehome view that might not resonate as much with the country outside. Also making it personal could back-fire. You could see it being said that the NO camp was going down this route because it was losing the argument on the issue itself.

In any case the approach relies to a large extent on Clegg playing a prominent part in the campaign which is not going to happen.

Interesting all the same.