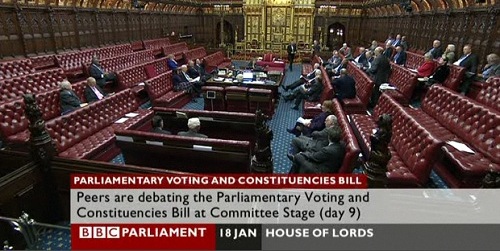 What’s the consequence of not holding it on May 5th?

In the next few days big decisions will have to be taken on the voting and constituencies bill which has been held up by the massive Labour filibuster in the Lords.

I think that de-coupling would be too hard a measure for the Conservative party, which is none too keen on the referendum part anyway, to swallow and that if resistance continues then putting back the referendum is quite possible.

This would almost certainly mean that the referendum would be the only election taking place on the new date which is likely to have a huge impact on turnout. My guess is that it would be in the mid-20s as opposed to the mid-high 30s if it’s on May 5th.

What’s hard to call is which side would benefit most from fewer people overall taking part? Who are most motivated to vote?

What polling there’s been suggests that the traditional high turnout demographic segments, the older middle-classes, are less enamoured with change than the young. That could be balanced by the YES campaign having a more positive message than NO.

I also wonder whether the Tory polling position might cause some in the party to change their traditional view. Essentially the blues believe that voting reform could stop them from ever forming a majority government again. But if the polling suggests that there is no prospect of an outright victory anyway then voting reform could be seen as helping the coalition parties prevent Labour from returning.