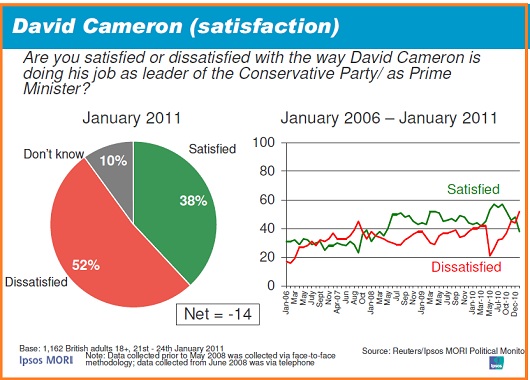 Was January a blip – or the continuation of a trend?

As PB regulars know I take a lot of notice leadership approval ratings particuarly those from MORI which has been asking the same questions for more than thirty years.

Also, taking the lead from several leading academic political scientists who track this, my main focus is on the “satisfaction” figure and I’m less concerned about the negatives. In terms of predicting electoral outcomes it’s the proportion saying they are satisfied that is key. Whether they “don’t know” or are not satisfied is irrelevant – they are not ready to be positive.

In the immediate aftermath of the election and the formation of the coalition Cameron’s rating moved to 57% and only three months ago it was still in the 50s. By December it was at 48% dropping by a huge ten points since then.

Now it might be the January figure is an outlier and cerainly the fieldwork for the poll took place over last weekend in the aftermath of the Coulson departure. We need to look at the next couple of months before drawing too many conclusions – but even so this figure should be worrying particularly as other pollsters asking similar questions have been coming up with the same broad trend.

Also Cameron is at his best when things are bad for him and I thought that this week’s PMQs’ performance was his most accomplished for some time. In September 2007, at the height of the Brown honeymoon, Cameron’s MORI rating dropped to just 23%. He went on to play a blinder at the party conference and we all know what that led to.

One thing’s for certain – his honeymoon is certainly over.