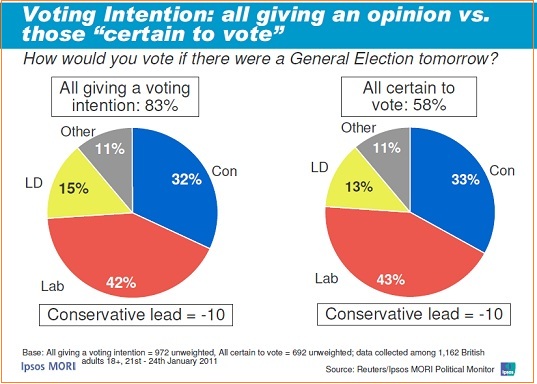 The Reuters/MORI poll for January is just out and shows a five point decline in the Tory share and a four point increase in Labour’s. The result is a gap between the two main parties of ten percent – the widest in any poll since the general election.

The Lib Dem recovery – seen in recent Angus Reid/YouGov/ICM surveys – has also been picked up by MORI providing some support for the view that the worst for the yellows is now behind them.

It should be noted that MORI operates differently from all the other pollsters. The firm does not apply any measure to ensure politically balanced samples and in its headline figures it only reports on those who are 100% certain to vote. The result is that it can be volatile.

Other findings in the survey, the leadership approvals ratings, are also not good for the Tories. Cameron is at his lowest level since the general election. But the Tory leader continues to be doing much better (79% saying satisfied) amongst his own supporters than Ed Miliband (59%) is amongst Labour ones.

There’s a lot more in the data that I will be covering later.