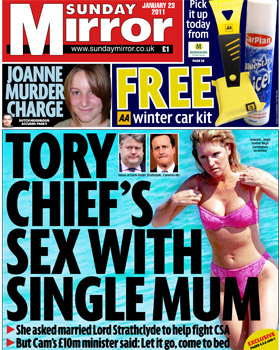 Is it really a scandal “to rock Cameron’s government”?

We’ve now got a glimpse of the Sunday Mirror front page and we can judge for ourselves whether the Sunday Mirror Tweet, re-Tweeted by Tom Watson and others, was correct earlier in the evening when it said it had news of a “Massive political scandal to rock Cameronâ€™s government”.

The problem about building something up which doesn’t live up to its billing is that we’ll remember next time. Terms like “massive scandal” and “rocking Cameron’s government” need to be used sparingly.

Unless there’s something more, not featured on the front page, I fear that the original Sunday Mirror Tweet says more about the paper than it does about the state of British politics.

UPDATE 0515: This was a re-tweet by Tom Watson of a Tweet by the paper. I have amended the text and the headline in this piece to make that clear. My apologies to Tom.