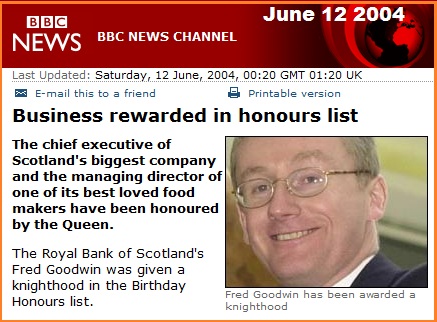 How long will the Goodwin knighthood remain a live issue?

I very much doubt that when in 2004 Tony Blair signed off Gordon Brown’s recommendation of a knighthood for the then RBS boss, Sir Fred Goodwin, that anybody had any idea that this would be a live political issue seven years later.

At the time Goodwin was one of the UK’s must successful businessmen to be lauded and praised and, as it turned out, to be included in the Queen’s Birthday Honours list for 2004.

But last week, in the first PMQs of 2011, the Goodwin honour was used once again by Cameron as part of his argument with Ed Miliband over bank bonuses, the economy, and, ultimately, who is to blame for the country’s financial situation.

It will go on like this for as long as the state of Britain’s finances when Labour left office remains a political hot potato. The opposition says it was the bankers who were wholly to blame – the coalition seeks to refute this and says that Labour’s management of the financial system was a key factor.

The problem for EdM is that these issues are too complex for most people to get their heads round. So the symbolism of the honour bestowed on Goodwin becomes a short-hand to be repeated time and time again.

The big picture, of course, is that the coalition’s main rationale for the cuts is the need to deal with the financial crisis. So almost any argument over a specific cutback or change gets reduced to the state of the economy when Labour left office on May 11th 2010.

So far, it seems, the public are buying the government’s version of events. The latest YouGov tracker on who is to blame for the cuts has Labour on 40% with the coalition on 22%. Labour, I’d suggest, needs a new rhetoric on this because as long as it is blamed for the cuts then any return to power will be impeded.