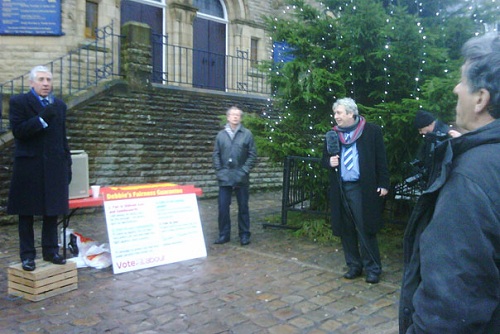 Jack Straw addresses a meeting of one – Channel 4

Why are voters keeping it so close to their chests?

A former Tory MP who has been doing extensive phone canvassing for the by-election told me on Friday of how difficult it was getting any response or indication from those he had contacted in the constituency. He’d made dozens of contacts but call after call ended in the same way.

He put it all down to “northern reticence” and maybe he had a point for the pollsters seem to have had exactly the same problem.

Judging by the detail from all three OES polls that came out on Saturday night there were huge numbers of respondents, the highest I can recall, who didn’t give any indication of intentions although many said that they would be voting.

A lot has been written about the very small number in the Survation poll on which its figures were based – but ICM totals look equally paltry. It spoke to to 504 people who responded like this:-

Once the turnout weightings were applied the number were reduced even further so that the initial total on which the findings were based was just 208.

A very large proportion of Tory general election voters, 37% refused or said they didn’t know with 23%% of the Lib Dem voters from that election responding in the same way.

The big question is whether those prepared to say are representative of everybody else. Polling is about extrapolation and the firms have simply had to use the data they’ve got in the way that they do.

What ICM and Populus do is to take the “don’t knows/won’t says” and then allocate them according to their own formulas. For the Tories with both firms half are added to the party they supported last May. With the LDs ICM also adds a half but the Populus formula is to allocate just three-tenths of them.

This “spiral of silence” adjustment, as it is known, worked very well for ICM and Populus at the last election enabling them to top the accuracy tables – but will it work again in this election?