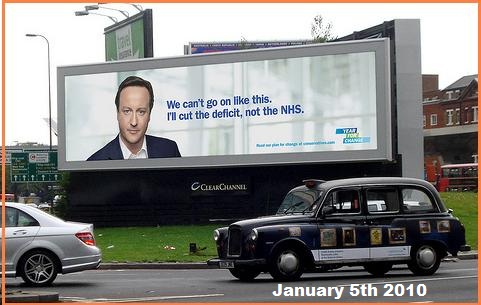 Was this when it all started to go wrong for the blues?

We all, I’m sure, remember this poster campaign for the blues that started exactly a year ago today.

Within minutes of it appearing it was being parodied on the internet and then there was the suggestion that the image of Mr. Cameron’s face had been “air-brushed” to make him look better – something that still continues to dog the Tory leader. The approach was perhaps just too personal for the British approach to politics.

From a position where the Tories had healthy double digit poll leads and Cameron good approval ratings things started to edge off.

Within a short period people began questioning whether the Tories had “sealed the deal” and whether we might be heading for a hung parliament.

There was, looking back, a change in the political weather in early January 2010. Whether this was down to the posters is hard to say – but they act as a good pointer.