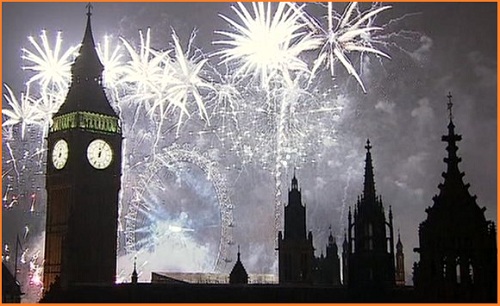 Goodbye to 2010 then, a year that saw more that its fair share of turn-ups. How many of us would have predicted that thereâ€™d be a Con-LD coalition government running the country? Whoâ€™d have been brave enough to predict Ed Miliband would be leading Labour? Would any of us haveÂ foreseen that during the year the Lib Dems would have polled either a first place – ahead of both the Tories and Labour, following the first debate – or dropped into single figures, never mind both?

Domestically, itâ€™s likely to be a difficult year for the government. There will be protests, strikes and probably more riots. Cuts have been announced but few yet implemented: they will have been in 12 monthsâ€™ time. At the same time, VAT and Council Tax rises will hit pockets and the inflation rate, and thereâ€™s the prospect that the interest rate may finally start to creep back up from the emergency 300-year low it plunged to nearly two years ago.

Put simply, there will be an awful lot of losers and not many winners. The key battle then will be about the blame for the pain. Here, the lines are well rehearsed and are unlikely to change. The question is how public opinion will split between the governmentâ€™s case of an unsustainable inheritance, and the oppositionâ€™s, that cuts are being made too far, too fast and unfairly.

That debate will go on throughout 2011 and beyond. By contrast, the climax of the year will come on May 5, with Scottish, Welsh and Northern Irish general elections, local government elections across virtually all of England outside London, and of course the AV referendum.

These will be bad for the government, possibly spectacularly so. In 2007, the Conservatives gained close to a thousand council seats and Labour lost over five hundred. Iâ€™d expect that to be more than reversed this time. The Lib Dems could be in even more trouble. Defending over two thousand seats when their poll rating is half or less what it was then could be bloody. Their only consolation is that many of their seats are in smaller rural councils where the Tories are their main opposition, providing less opportunity for a protest vote.

Labour will be looking to gain an outright majority in Wales and should do so for the first time (and will probably gain greater powers in the process, after the referendum in March). I also expect Labour to be back in power in Holyrood, albeit in a minority government. By contrast, Northern Irelandâ€™s Executive is likely to see little change.

But as far as UK politics goes, the big one is the AV vote. If that goes down – and I think it will – things become very difficult for Nick Clegg, with poll ratings at rock-bottom, a lot of disgruntled activists and ex-councillors and not much in return for entering government. My guess is that Clegg (like Cameron and Miliband) will see the year out as leader but only because the course is set and the damage canâ€™t be undone except by proving the worth of the policies, which means they canâ€™t be abandoned half-way through.

If, on the other hand, Clegg leads the Yes camp to victory, much will be forgiven as it will represent a big step towards PR (not of itself, as pbc has discussed interminably but as a means of ensuring future general elections are more likely to result in hung parliaments).

The AV vote will also place enormous tensions on two other groupings: the government itself and the Labour Party. Having government ministers splitting almost if not entirely on party lines will drive a wedge between them even if itâ€™s a well-conducted and polite campaign. Whichever party comes out as losers will have their future prospects substantially diminished. Labour, by contrast, looks to be splitting down the middle, or even into a leadership vs. PLP situation. For a leader yet to fully establish his authority, thatâ€™s not a wonderful situation to be in either. Fortunately for Miliband, the polls and election gains are likely to bolster his position.

Internationally, itâ€™s a bit of an off-year before the bumper 2012. There are no general elections scheduled in any of the G7 countries but Berlusconi will do well to survive the year in Italy (though weâ€™ve said that before). Closer to home there will very probably be an mould-breaking election in Ireland, where Fianna Fail and Fine Gael – the two parties that have dominated politics there since independence – are currently struggling to poll 50% between them.

Of even more interest to punters however will be the build up to the big 2012 elections, in particular the presidentials in France and the USA. All the candidates for the American presidency will have to be declared and their campaigns up and running well before the end of the year. I expect Sarah Palin to be amongst the front-runners come December, though I think sheâ€™ll ultimately miss out on the nomination to a more establishment current or former governor.

Such are some of the known knowns and known unknowns. As ever, there are the unknown unknowns that will undoubtedly be thrown into the mix too from by-elections to economic surprises to extreme weather to personal scandals. However else it turns out, I hope itâ€™s a successful and profitable one for you.