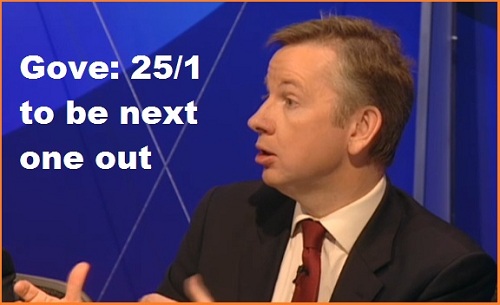 How many mistakes is one too many?

Michael Gove appears to have performed so many U-turns this month that perhaps he should have been the cabinet member on Strictly Come Dancing. Heâ€™s certainly required fancy political footwork to come out of the episode without too much damage, having firstly changed his mind on the funding of school sports and then again on provision of free books.

This comes on top of embarrassments during the summer when his department released inaccurate lists relating to the revised BSF programme. He took quite a hit for that, despite it being mainly the fault of the officials who put the lists together. Strangely, the damage heâ€™s taken this time hasnâ€™t been as bad even though the policy decisions were much more his responsibility. Heâ€™s lucky that higher education no longer falls within his departmentâ€™s brief otherwise heâ€™d have had tuition fees too.

Even so, heâ€™s been an accident-prone member of cabinet so far which has to beg the question as to whether the 25/1 Ladbrokesare offering for him to be the next cabinet minister to leave represents attractive odds.

Both the U-turns have several things in common: the consequences of the original decision were not thought through, the likely resistance of high-profile lobbyists was missed, the proposed cuts were for relatively small amounts and apparently in neither case did Gove consult about the proposals.

This seems to be Goveâ€™s way. He is driving through a substantial and radical programme and itâ€™s true that one time-honoured way to prevent its implementation is to bog it down in reviews, consultations and so on – things heâ€™s obviously determined to avoid. That said, a failure to consult even with those who should be on his side, combined with a repeated inability to spot a political landmine is a weakness and one that could potentially prove fatal. Given that the projects in question were concerning small amounts relative to the overall budget, it does beg the question as to who put them forward and why.

Gove has taken on a lot of vested interests within the education establishment. Heâ€™s not tried to win it over to his way of thinking, presumably either because he thinks thereâ€™s no way he could or because he canâ€™t be bothered. There will without question be many who wish to stop him and the U-turns this month will no doubt serve to strengthen their resolve, especially as Gove retreated both times he was challenged.

The Next to Leave market is essentially about resignations before a planned reshuffle, and resignations tend to come because of policy disagreements, personal problems or serious political errors. Of those three, thereâ€™s almost no reason to see him leaving because of a policy disagreement, personal issues are usually nigh-on impossible to predict but he does look vulnerable on the final possibility. His odds imply heâ€™s one of the less likely to be next out. I donâ€™t think thatâ€™s making sufficient allowance for events and in particular, the potential to seriously mess something up in a big department carrying out radical reforms while his political antennae are malfunctioning.