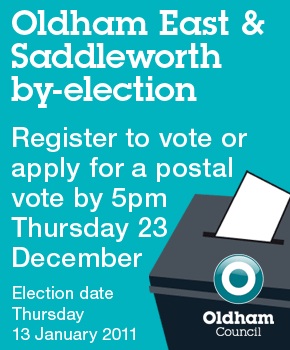 Which party has netted the most?

At the general election on May 6th 2010 a total of 8,316 of 45,092 votes that were cast in Oldham E & Saddleworth were postal ballots – that’s almost one in five and typical of what we saw in closely contested marginal seats.

For the party machines like to “bank” as many votes as possible before the election so that on the day they can focus on getting the non-postal voters out. They are also a form of insurance against poor weather conditions or other factors that could deter electors from going to the polling station.

Given that it’s been clear for months that there there would be a winter by-election if the case went against Phil Woolas the party machines have been working flat-out getting many more of their supporters to sign up. That stage of the campaign finishes at 5pm today – the deadline for the receipt of applications.

With a low turnout on the day it could be that the overall number of postal votes is about half of the total.

Those who are on the list should get their ballots a week tomorrow when voting in the first by-election of the coalition age will start. The normal pattern is for a large number of completed ballots to be returned with a couple of days.

So who has won round one – the battle for postal votes? We won’t know until the count itself but the yellows tell me that they think they’ve matched the red team in this race. Who knows?

Clearly voters who have been signed up have no obligation to the party that has facilitated their application and it might be that the Lib Dems will see a seepage of postal votes that they thought were in the bag.

Later today nominations close. In the betting Labour is priced between 1/6 and 1/4; the Lib Dems are between 7/2 and 9/2, while the Tories have now moved out to 31/1 on Betfair.