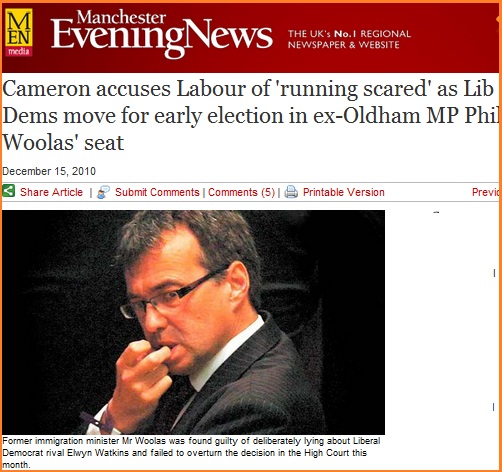 How will the coalition operate in its first by-election?

The headline in the Manchester Evening News says it all. The Lib Dems will be moving the old & Sad by-election writ today and a Tory prime minister accuses Labour of “running scared”.

Clearly the decision to put convention to one side and for a non-incumbent party to be moving the writ suggests a high degree of co-operation between the coalition partners. For if Labour object the overwhelming advantage that the Tories plus the Lib Dems have in terms of MPs will come into play. Labour might have wanted a February encounter but they have no control.

Should Labour push to this to the vote? Maybe to make a point but I’d suggest that the party has a bigger challenge this morning as new leader Ed Miliband heads north to make his first campaign visit.

How’s EdM going to respond if pressed on why, after the election court hearing had taken place in September, he chose Phil Woolas to be in his shadow ministerial team.

It looked as though EdM was condoning what he had been revealed in court. If it was crazy at the time it looks even crazier now.

For if the yellows have got a chance it will be by keeping the Woolas issue as live as possible. It appears as though Labour doesn’t recognise the nature of what the party did in the seat in May and that is going down badly on the doorstep.

But the really interesting feature in the next four weeks is how the blues and the yellows campaign against each other. For the Tories, although in third place in May, were not far behind but are they going to go all out against their coalition partner?

This is a tricky one because Cameron has got his party to contend with and the murmurings about how the coalition is undermining true blue values seem to be increasing by the day.

In the betting what we want is a Betfair market.