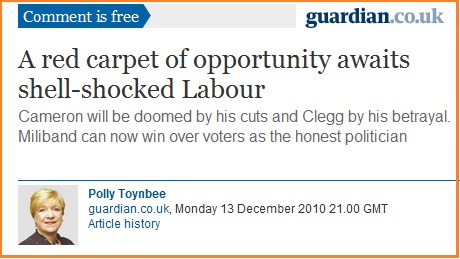 What do we think of Polly’s election prediction?

Although the next general election might not take place until May 2015 there’s what amounts to a big prediction by Guardian columnist, Polly Toynbee, in the paper this morning.

Talking about a “red carpet of opportunity” awaiting Labour she declares that “Cameron will be doomed by his cuts and Clegg by his betrayal.”

All this is based on a thesis that growing unemployment together with the benefit cutback will be the big driver of opinion. She writes:-

“In a time of high employment and plenty, public sympathy towards welfare claimants wanes. Democracy has a corrective instinct, so after a Labour era when tax credits redistributed significantly, many fewer think benefits should rise than did so at the end of Margaret Thatcher’s harsh regime. Who doesn’t think the unemployed should work when jobs are plentiful?

But when the facts change, so does public opinion â€“ as shown by fluctuations in attitudinal polls. Opinion may lag behind the facts, but by this time next year expect to see the pendulum swing the other way. Most people will know of someone who has lost a job through no fault of their own, many ejected from useful public service. People will be shocked to discover jobseeker’s allowance is just Â£65.45 a week….

..Talk to Labour ministers, and most are still so shell-shocked they can’t see the red carpet of opportunity stretching out before them. Who would have thought they would be level-pegging or better in the polls after just eight months after a well-deserved defeat?

..So Labour looks set fair, whatever its own depressives think. Only mighty blunders of great idiocy can stop Miliband’s party winning the argument with enough voters..“

Polly might be right but at this stage nobody can really project what impact rising unemployment, if it happens, will have on opinion.

She talks about voting intention polls which have now edged Labour’s way but the latest PAPA still has the red team in the 30s. Whatever she ought to look at the leader approval ratings where Ed Miliband has fewer Labour voters saying he’s doing “well” than Conservative supporters saying the same of Nick Clegg. And that polling took place after Thursday’s vote and the riots.

There’s also a much bigger threat posed by the coalition – that supporters of the two parties might vote tactically against Labour. If that starts to happen on any scale then much of the in-built advantage that Labour has enjoyed might evaporate.

But it’s all a long way off and I’m not making any predictions.

Ladbrokes have Labour at 6/4 to get most seats at the next election.