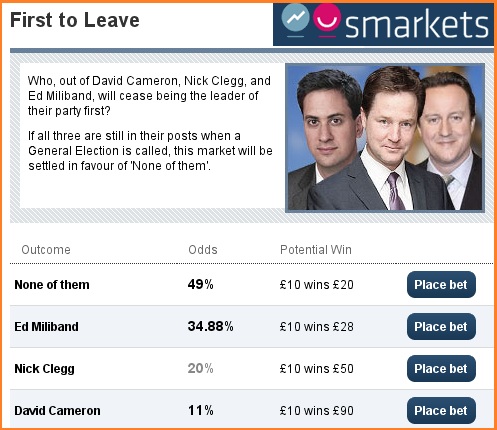 Several traditional bookmakers have been running markets on which of the three party leaders will be first to leave their post and I’ve yet to tempted by any of them. The markets are open-ended and it could be years before you get a return.

The new betting exchange, Smarkets, has a slightly different structure in that there’s an option on Cameron/Clegg/Miliband all still being in their jobs at the time of the next general election.

Because it’s betting exchange you have the opportunity to wager against any of the suggested options and I’ve just had a flutter, at an effective 6/4, that one or more will have gone before the election. I’ve done this by “laying” (betting against) the top option – that none of the three will have had to step down.

To me this is a great bet because it covers a range of options. We’ve rehearsed in recent days the problems facing both Nick Clegg and Ed Miliband and who knows what could happen to David Cameron?

On the latter the Davis Davis announcement that he plans to vote against the tuition fee measure on Thursday is hardly a friendly act. DD looks as though he’s on manoeuvres.

I find it hard to choose which if any of the three will go first. Clegg looks vulnerable as does Ed Miliband but there must be a decent chance that something will happen to one of them in the next four and a half years.

The bet should pay out just as soon as one steps down. I only lose if they are all still there at election time.