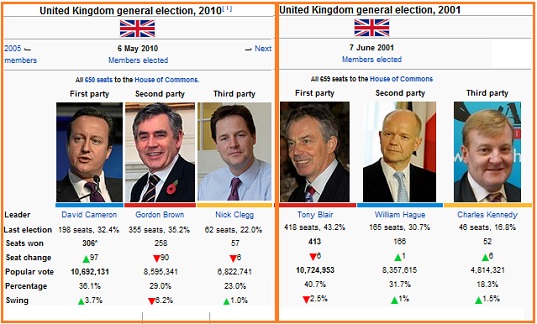 A tale of two elections

At first glance, the 2010 and 2001 general elections couldnâ€™t be more different. But look again and you can see a curious coincidence that may have a bearing on the future.

In 2001, Labour won a landslide and was secure in power for more than 5 years. Turnout was low, largely because the result was widely expected. The 2010 election was close, turnout rose. We ended up with a balanced hung parliament, which created the unique circumstances required for a Conservative, Lib Dem coalition.

Despite the different outcomes, count the raw votes and we find a remarkable similarity. In 2001, the most popular party, Labour, received 10.7 million votes. As runners up, the Tories received 8.4million. Now fast-forward to 2010. The parties are reversed, but the votes are almost the same. The most popular party, now the Tories, also received 10.7million votes. Labour, the runners-up, received 8.6million. Spooky!

Having spotted this coincidence, can we learn something? If the votes are similar, how can one election bring a landslide and the other a hung parliament? What is different, did anything change? Why did Labour win 100 seats more than the Tories with the same vote? There has to be more to it than parliamentary boundaries.

The obvious change is that the Liberal Democrats gained 2 million votes since 2001. This enabled them to win 11 extra seats and retain marginals vulnerable to the Tory advance. The Lib Dems also prevented the Tories winning some Labour marginal seats by providing an alternative receptacle for anti-government votes. Taken together, it is pretty clear that those extra 2million Lib Dems helped deny Cameron a majority.

Delving deeper reveals another problem for the Tories. In 2010, the Tories piled up massive majorities in safe seats. They won more than 120 seats with votes greater than 25,000. In 2001, Labour won only 18 such seats. Big majorities, though nice to have, donâ€™t get you very far under first past the post. In 2001, Labour won a landslide by being attractive across the country and doing just enough (and no more) to win a seat.

What lessons can the parties learn for next time? The Tories must broaden their appeal to win a majority. Cameron has done nowhere near enough. Labour will discover a winning formula if it can reconnect with its lost voters. The Liberal Democrats have massive problems if they fail to win their AV referendum. Both major parties are going squeeze the Lib Dem vote hard next time. Clegg needs an entirely new strategy. Can he deliver it?