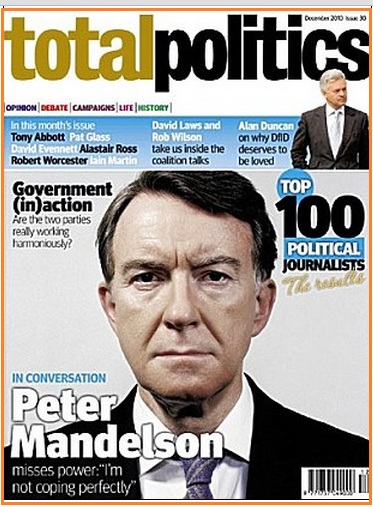 Does him being around make EdM’s challenge that more difficult?

Several papers, including the Mail on Sunday and the Sunday Telegraph, this morning carry reports of an interview for the Total Politics magazine with Peter Mandelson during which he reveals that Labour’s new leader told him to “retire with dignity” – a term he interpreted as “being packed off to the old folk’s home“.

In it Mandy pledges to be loyal to Ed Miliband, saying he did not want to be an â€œirritant or backseat driverâ€. Yet he then goes on to pour bile on the new leader by saying he never seriously thought of Ed as a leader and that the younger brother had played a part in the plot to undermine Tony Blair and replace him with Gordon Brown.

This is all great stuff for those of us engrossed with the soap opera of politics but I fear that Mandy’s ongoing desire for attention is not helping his party.

He backed the wrong brother in the leadership fight and he’s got to live with the consequences. Hard as it might be to swallow Mandy’s needs to reconcile himself to the fact that the election of Ed Miliband saw the mantle being passed to a younger generation and the best thing he can do for Labour is to shut up.

Alas that is not Mandy’s style and I think we are going to see more criticism of the leadership from him combined with apparent statements of loyalty.