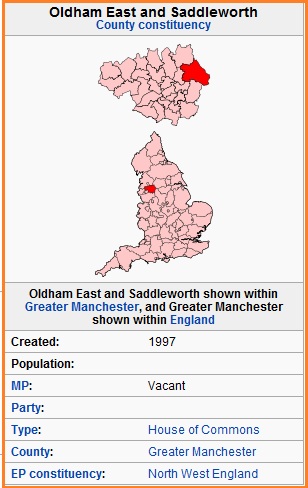 Will it be down to who is best at fighting in the dark?

The Old & Sad by election has been put on one side as everybody waits for the judges to give their verdict on Woolas’s appeal for a judicial review. That’s expected during the coming week and the verdict could trigger off the process in the commons of calling the by election.

Dates being talked about are December 16th and even December 23rd when the hours of daylight will be at almost their shortest – certainly sunset will be before 4pm, more than six hours before the polls close.

The general theory is that it’s much harder to get people out to vote in the dark, particularly if its wet/damp/cold outside as is highly likely in that part of Lancashire in December.

My understanding is that the parties are working hard on getting people to register for postal votes which could deal with some of the problems. But isn’t there a danger of responses getting mixed up in the Christmas post when the Post Office is usually stretched?

The last by-election this close to Christmas was at Falkirk on December 21 2000 following Denis Canavan’s resignation. Turnout was sharply down to less than half the 72% at the 1997 general election. The Labour vote dropped from 22,772 to just 8,492 and the party held on against a strong SNP challenge by 705 votes – a fall of more than 13,000.

Then Labour was in government and it’s always reckoned to be harder to defend a seat in such circumstances than when you are in opposition.

At Old & Sad the red team will be keen to prove a point and my guess is that they’ll be a lot more motivated. They’ll try to make it a referendum on the cuts.

The blues and the yellows will be fighting it out over which is best placed to defeat Labour and the Lib Dems best chance will come if they can convince Tory voters that they are in with a shout. The same will work the other way round.

In the betting the Labour price has tightened with Ladbrokes at 2/7, PaddyPower at 1/4 and William Hill at 4/11.

Hopefully Betfair will get a market up as soon as the election is ordered.