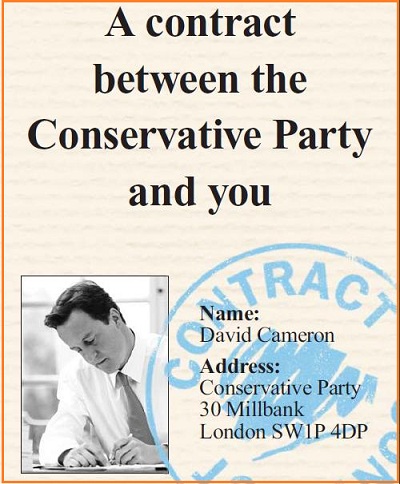 Could the differing treatment be what undermines the pact?

In the run up to polling day on May 6th the Tories sent out a mailer to selected voters in key marginal seats headed “A contract between the Conservative Party and You”. It was designed to ease voters’ concerns about certain key areas of spending that the red team said were being cut.

Most of the items listed were directed at pensioners – keeping free bus basses, the winter fuel allowance, free prescriptions and TV licences for the over 75s.

The “document” ended with this paragraph above the signature of David Cameron – “So this is our contract with you. I want you to read it and – if we win the election – use it to hold us to account. If we don’t deliver our side of the bargain vote us out in five years time.”

In last month’s spending review statement all the pensioner perks listed by Dave were protected by the chancellor. Why?

The person who has highlighted this is Alex Barker of the FT who contrasted what’s happened to the contract with Clegg’s “pledge” on student fees: “..For these two men, they were a high-profile test of their credibility. It was a question of trust. Are the party leaders true to their word? Can voters believe every big pledge they make? On those terms, Clegg failed the test..

…why did Cameron get away with sparing pensioner perks? Surely the responsible thing would have been to eat his words? The benefits fail the test he applied to child benefit. Why should poor working families pay taxes to fund free bus passes and winter fuel payments for millionaires? The position is indefensible and Cameron was told as much by some Tory cabinet ministers as well as the Lib Dems.“

As the pressure continue on Clegg more in his party are going to be asking why Cameron was able to get away without getting his hands dirty. It’s on issues like this that the coalition could flounder.

The political balance has changed this weekend with the election of the tough-talking Tim Farron as the new president of the Lib Dems. He’s not going to be shy about asking pushing this issue.