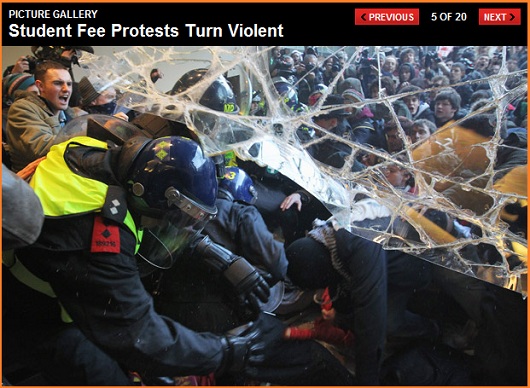 Could the students spark off wider violence?

It’s become almost fashionable in recent times to contrast the lack of action on the streets in Britain with that seen so often across the channel particularly in France.

It’s almost as though we are suggesting that the Brits are somehow superior because they don’t act like continentals.

Well that view has taken a hammering today in more ways than one.

The pictures do look shocking and, clearly, this would have been an even bigger story if that fire extinguisher dropped from the top of that tower had landed on somebody.

But is this just a one-off? Could November 10 2010 be a prelude to wider civil action against the expenditure cuts?

It’s hard to say and it’s even harder to assess the political reaction. There are challenges for all the main parties. Labour has to be ultra careful not be be associated with the violence while the coalition partners might just reconsider how the cuts programme rolls out and how it is presented.

Ladbrokes, meanwhile, have put up a couple of new markets. It’s 5/1 that there’ll be a U-turn on student fees and evens that a minister will resign by the end of the year. I’m not tempted by either.