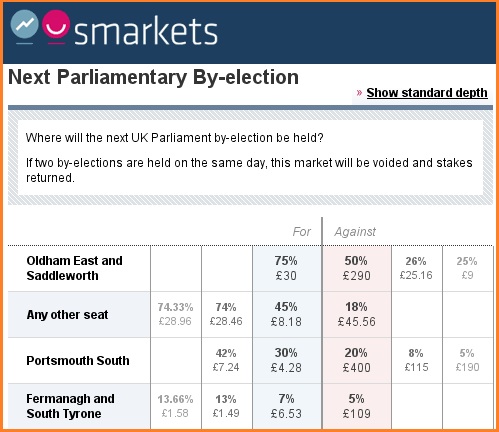 Were the Woolas leaflets personal or political?

The only betting market relating to today’s court announcement of the verdict in the Oldham East & Saddleworth case is the one above from Smarkets on where the next by election will be held?

This is not very liquid although, as at 3am, there was Â£390 available to lay at 50% on the Phil Woolas seat NOT being the location of the first by election.

The critical elements in the case are whether the two judges rule that Phil Woolas leaflets contained “false statements of fact” in relation to the the Lib Dem candidates personal character or conduct”.

It is worth looking at the wording of section 106 of the Representation of the People 1983. This states:-

(1) A person who, or any director of any body or association corporate whichâ€”

(a) before or during an election,

(b) for the purpose of affecting the return of any candidate at the election, makes or publishes any false statement of fact in relation to the candidateâ€™s personal character or conduct shall be guilty of an illegal practice, unless he can show that he had reasonable grounds for believing, and did believe, that statement to be true.

The details of five specific allegations are set out well by Nick Thorsnby in a series of blog posts during the trial in September. These can be found here, here, here, here and here.

Having ploughed through Thorsnby’s account of the court case I think that 50:50 is the right assessment. For this is not about political attacks but whether the judges conclude that personal untrue statements were made.

The court is sitting at 11am.