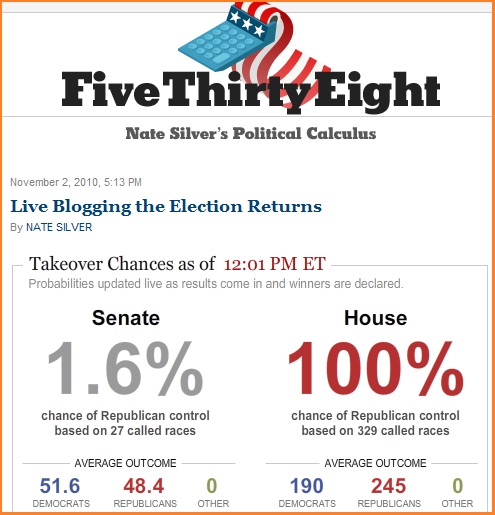 Nate Silver at the New York Times
I like the way Nate Silver is representing this election as all eyes focus on the west coast states of California and Washington which look set to determine the outcome in the Senate.

The GOP has made big gains in the House of Representative winning most of the key races.

I was struck by this point from Kieran on the previous thread:-

“This configuration (Dem Pres, Dem Senate (if it holds), GOP House) is uncharted waters for US politics. One of the long-term stories about tonight that might be missed is the continued realignment of American politics between the Democrats (increasingly Northern, coastal and liberal) and the Republicans (increasingly Southern and conservative). Obama has proven just as polarising as Bush, with the other half of the country p*ssed off this time.”

The big question later today will be what this all means for Obama’s second term bid in 2012.