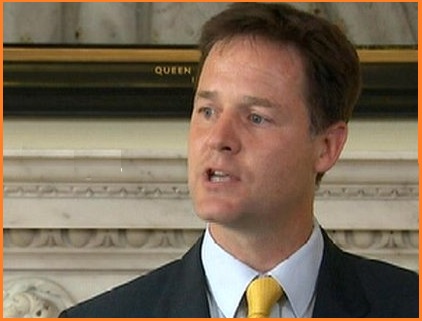 Has he broken what’s become the ultimate taboo?

Extraordinarily one of the most covered political stories this morning is the “confession”, if that is the right word, that Nick Clegg made to Kirsty Young on Radio 4s Desert Island Discs that he likes to smoke.

The “revelation” came at the end of the programme when he revealed that his “luxury on a desert island” would be “a stash of cigarettes.”

I like Nicholas Lezard’s article on this in the Guardian in which he touches on the whole taboo that cigarettes have developed into.

He writes: “To admit to being a smoker is to admit to being weak, to being in thrall to an addiction (albeit not a glamorous one), to not knowing what is best for one. And, worst of all, for not doing as the majority tell you to do. There is no excuse for smoking, not really â€“ you can manage without it â€“ and so it enrages people all the more when someone admits to it.

But the more people act like that, the more the smokers will entrench. Like the last village in Gaul that resists the occupying forces of the Romans, there will always be a group of smokers who do so not only because it can relax one wonderfully (think of all the soldiers who smoke) but precisely because it enrages an enormous number of busybodies.

And so maybe there is something shrewd about Clegg’s confession. It looks as though he’s not reading from the script, but maybe he’s smartly aligning himself with the disaffected. There is something endearing about politicians who smoke: it shows they are human, and as such subject to human failings, and take the responsibility of high office seriously indeed. (What kind of a maniac, one might think to oneself, does not smoke when in control, or part-control, of one’s country?) The news that Barack Obama had failed to give up entirely didn’t, amazingly, stop him from being elected president..”

Clegg is seen in some quarters as being a bit too sanctimonious and this news might just help to blunt that perception. At the very minimum Clegg’s quiet fags every so often have moved the narrative on from the cuts. I wonder what impact it will have on his approval ratings which have taken a dive recently?

No doubt Fleet Street’s finest will be charged with trying to get a shot of him puffing away. I can see one of the news conscious bookies offering odds on whether a picture will be published. They’ve had dafter markets.