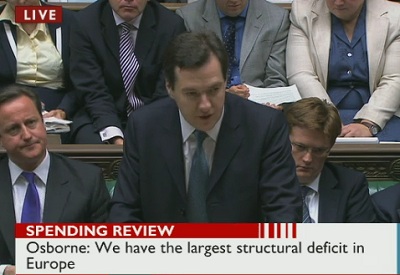 Is the devil within the detail?

Several people have commented that this statement was very much like a Gordon Brown budget. It was certainly astute as a means of dealing with the political needs of the moment but will it stand up to scrutiny. How’s it all going to look in a few days times when it’s been subject to the most intense examination.

What was very Brownesque was the way Osborne finished – claiming that what they were doing involved cutting less than what the last Labour chancellor, Alistair Darling, had been planning. This certainly wrong-footed the shadow Chancellor, Alan Johnson who looked uncomfortable when he made his response.

I can’t help but feel that either Mr. or Mrs Balls would have done a substantially better job.

A lot now depends on how this is reported – not just tonight on the bulletins but in the media in days to come. If that’s relatively positive then the Tories could maintain a poll lead.