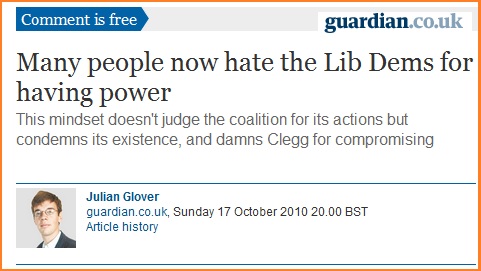 Is the coalition being judged on its existence – not its actions?

As we start this critical week a Monday morning column that stands is the one by the Guardian’s Julian Glover is which he tries to answer the question of why many on the left seem to hate the Lib Dems so much.

He writes: “..The big boys ran the country. The Lib Dems were supposed to yelp admonitions from the sidelines. Labour commissioned the Browne review on student finance. The Lib Dems’ assumed duty was to oppose it, however dotty the grounds for doing so.

Then along came the coalition, and everything became extraordinarily different. The old world has been blown inside out. The people who never had power suddenly have lots of it, and those who assumed it was theirs to keep can only complain. To a political generation that enjoyed a comfortable maturity under Labour, it remains outrageously inappropriate to hear of Nick Clegg and Danny Alexander sitting with a Tory chancellor and prime minister at quadrilateral meetings deciding the spending review.

This mindset does not judge the coalition for its actions but condemns the fact that it exists. The fury â€“ far beyond the scale of anything the Lib Dems expected â€“ is rooted in a hostility to pluralism that regards Conservatism as something approaching an evil, and any Lib Dem association with it an unnatural compromise. Presumably, the only acceptable outcome would be ceaseless Labour rule…

…The spending review has been the making of the coalition, and if it goes wrong it will be the destruction of it. Ministers from rival parties have been bound together in unthinkable alliances: Clegg backing Iain Duncan Smith on welfare; Eric Pickles seeking Lib Dem allies for localism. Of six sticking points thrashed out before the spending review was signed today, three went in the Lib Dem direction â€“ but to some that very act of dealing is to be damned…”

To my mind Labour got this wrong a long time before general election day. Just consider the role of Lib Dem defector, Andrew Adonis, during those critical weeks. He fronted the effort to try to persuade LDs to vote tactically and was one of the party’s key negotiators in the post-election coalition negotiations. Yet it should have been blindingly obvious to a party as tribal as Labour that the last person you should use in these roles is a defector.

It was interesting that in his conference speech Ed Miliband did not venture into this area even though he’d been the most Lib Dem hostile contender during the leadership campaign.

I’m sure that he’s worked that another hung parliament is a real possibility and doing a deal might be the only way he gets into Downing Street.

As it is the fury from the red team could just spark off an electoral dynamic that has the potential to cost Labour seats – anti Labour tactical voting by Tories. That hardly happened on May 6th – it might be different next time.