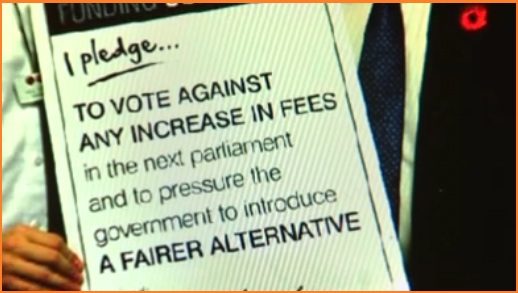 Have the LDs only themselves to blame for the fees predicament?

If truth be told when 54 of the current 57 Lib Dem MPs signed the apparently “solemn pledge” to vote against an increase in student fees then very few could have foreseen what a problem it would be six months down the line.

As a piece of campaigning in university seats the pledge signing by party candidates looked smart creating a neat photo op. But how it all looks so different this morning.

How many of them could have predicted at the time that they would be in coalition with the Tories trying to constrain and cut-back on government spending?

The report by former BP boss, John Browne, is going to propose a big increase and this is presented as the only way of dealing with the university funding issue during the current financial crisis.

The problem with the Lib Dem pledge was that it was part of their pro-active campaigning – they went out of their way to publicise and promote it. That compares with comments, say, made by David Cameron during the TV debates on pensioner benefits which were in response to the needs of the moment.

No doubt a way will be found to get round the problem but even then it’s hard to see how the LDs will square it with what was said last April.

The real lesson is not to make pledges in this form again – there always has to be some caveat even if it sound mealy-mouthed/.