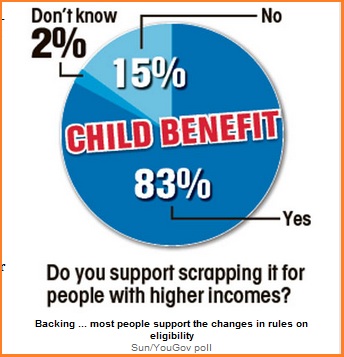 How much can we read into the figures?

As reported overnight the Sun is carrying YouGov poll figures this morning which suggest that the George Osborne plan to take child benefit away from those paying higher rates of tax is actually pretty popular. It’s hard to argue with an 83%-15% split.

But how much can you read into findings like this? For generally pollsters find that people are happy to support tax increases when it doesn’t affect them. The real question is whether this will swing votes at the margin and those who lose out with changes like this are much more likely to remember.

How much this will impact on an election more than four and a half years off is hard to say.

Where I think the Tories might have been hurt has been with the way they seemed to have wobbled a bit yesterday and there are suggestions that Monday’s move was decided by Osborne and Cameron alone without extensive consultation.

It seems the strategy was to announce this one first in order to prepare the ground for other cuts hitting people lower down the income scale that will be announced later. If so then the party should have been totally resolved without appearing to give ground.

The Tories will be cheered by the latest YouGov daily poll which has them at 43% which is only one down on the highest level that this particular form of polling has found since this election. So in three days the daily poll has moved from C39-L41-LD11 to C43-L39-LD11.

Today’s Cameron’s big speech and they should expect a further boost – but then it is the countdown to the big cuts announcement and its how public opinion looks after that which will matter.