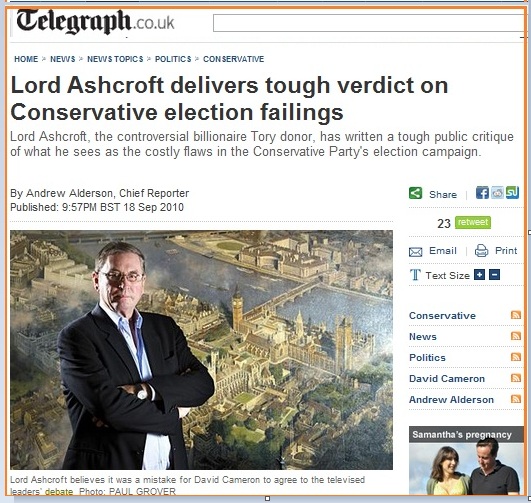 Is Ashcroft naive to think that this was an option?

The Sunday Telegraph is leading with details of the strong attack on the way Cameron and his team handled the election campaign in a report from controversial Tory donor, Michael Ashcroft, which is being published this week.

Given the way that his party’s double digit poll lead disappeared from Christmas 2009 onwards there is a lot in what he says about message and tactics.

But from paper’s report Ashcroft doesn’t touch on what for me was the key element – the hugely successful campaign that Labour mounted in those crucial months.

I think that the Tories underestimated the incumbency advantage that Labour had with the ability to control the media agenda. From January until the first debate on April 15th it was the red team that had the initiative and one of their successful attack points was the position of Ashcroft himself.

The controversial peer is particularly scathing about Cameron’s agreement to the TV debates and there’s little doubt that these changed the whole dynamic of the campaign.

The report notes: “The debates were arguably a tactical error which exposed a strategic problem: three weeks before the election the market was still wide open for a party of change. “Nick Clegg was only able to appropriate the territory of ‘real change’ because we did not dominate it ourselves.”

When these were being talked about a year ago I argued that it was a mistake for Cameron to agree because as front-runner he had most to lose. But looking back it’s hard to see how the blue team could have side-stepped the events or insisted that only two leaders take part. The narrative was just too strong.

I also think that the debates hurt Labour in those final three weeks because of the way that they framed coverage of the whole campaign.