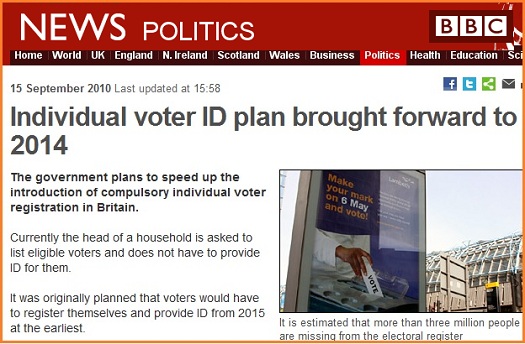 The news on the revised electoral registration arrangements to be put in place before the next general election might not sound particularly significant but it could make life that much harder for Labour at the next election.

Until now the head of a household makes a list eligible voters each and does not have to provide ID for them. Now the plan is that by 2014, before the planned 2015 general election, each individual voter will have to register separately.

There has been a compromise – those already on the electoral register will have until after the 2015 election to comply with the new rules.

There’s a view that the voters who are most likely to be disenfranchised by making it harder to register will be Labour supporters.

The Electoral Commission had made strong calls for individual registration as a means of combating electoral fraud and the Labour government had sought to put it back until 2015 at the earliest.

This change could impact on the outcome in marginal seats.