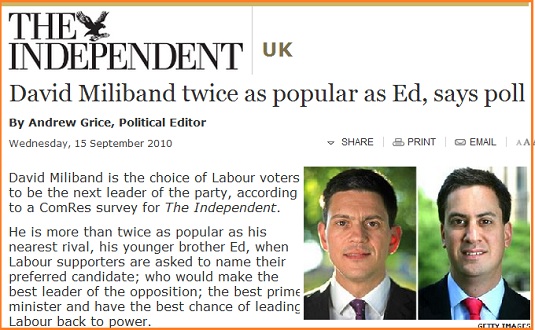 Can we ignore this latest poll?

There’s what might appear to be good news for the beleaguered David Miliband campaign in a ComRes poll for the Indy this morning. The sample consisted of 1,597 people who had voted Labour at least once since 1992 and all the findings seem to favour the ex-foreign secretary.

Across a range of questions such as “preferred candidate”,” best opposition leader”, and “best PM” the elder Miliband is beating his brother by a factor of at least two. Thus on preferred candidate in the current contest it’s DM 26% with EM on 11%. Abbott, Balls and Burnham are at 8%, 7% and 5% respectively.

For the message from this poll is that even amongst those who have voted Labour in the past there is very little awareness about the five who have put themselves forward to lead the party hence the fact that to every question the don’t know figure is in the 40s.

In terms of voting in this election it’s not the views of past voters who matter but those who are eligible to vote be they party members, trade unionists or MPs.

The poll might have an impact at the margin in swaying some of those who haven’t voted yet but not a very big one.

What it does show that whichever Miliband comes out top a week on Saturday he’s got a big job on his hands to get himself known.