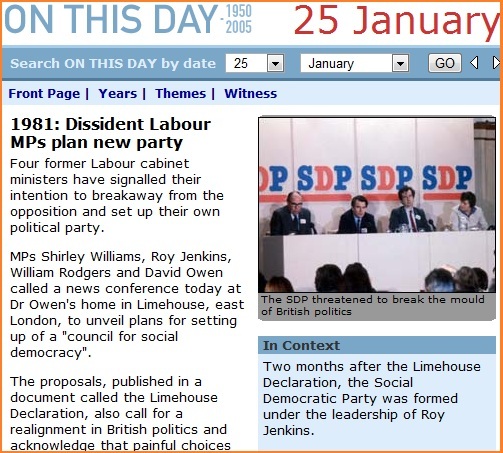 What does he do about the 1981 LAB>SDP defectors?

Whenever there are problems within the Lib Dem side of the coalition then invariably the names that crop up are Bob Russell, the Colchester MP, and Mike Hancock of Portsmouth South.

For these two alongside Business Secretary, Vince Cable, have several things in common notably that they are all in their mid-60s and they were all active Labour politicians who in 1981/82 defected to the new Social Democratic Party – the SDP.

That new force in British politics, founded in March 1981 with such great hopes of realigning the left, never quite made it – and after the 1987 general election disappointment it joined forces with the then Liberal Party to create the Lib Dems as we know them today.

There was quite a lot of bitterness at the time of the merger and one SDP faction, led by David Owen, refused to become part of the merged party. It continued for a year or so afterwards and the main opponent in my first political battle, for a county council seat in 1989, was a member of the SDP part that had refused to merge.

For there has always been some tension between the two strands because their roots and some of their philosophy is different.

Is it any wonder then the three three MP remnants from that early period are the one’s causing most difficulty? For their political journeys started with Labour, moved onto the SDP and then to the merged Lib Dems which is now in coalition with the Tories. No wonder Hancock and Russell appear so unhappy.