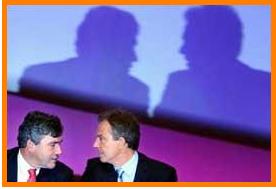 This is from the Press Association report:

“Tony Blair lays bare the divisions at the top of the Labour Party with the publication of his memoirs, focusing attention on his relationship with “maddening” Gordon Brown.

Former prime minister Mr Blair’s book, A Journey, reveals the depth of the rift between the figures who dominated British politics between 1997 and 2010. Mr Blair said he was put under “relentless personal pressure” by Mr Brown but could not sack his chancellor because he feared that would lead to him being ousted earlier.

In an interview with The Guardian Mr Blair said towards the end of his time in office the relationship with his eventual successor became “difficult, very difficult” with disagreements on major aspects of policy.

The newspaper reported that at one point in his book Mr Blair says he concluded that unless Mr Brown defined himself along New Labour lines his premiership “was going to be a disaster. I knew it”. But in the book Mr Blair wrote that he was powerless to prevent his successor moving from No 11 to No 10 Downing Street.

“It is easy to say now, in the light of his tenure as prime minister, that I should have stopped it; at the time that would have been well nigh impossible.”

Mr Blair acknowledged the strengths that made Mr Brown a formidable rival, and suggested his power base within the party and media would have made it difficult to remove him. “Was he difficult, at times maddening? Yes. But he was also strong, capable and brilliant, and those were qualities for which I never lost respect.”