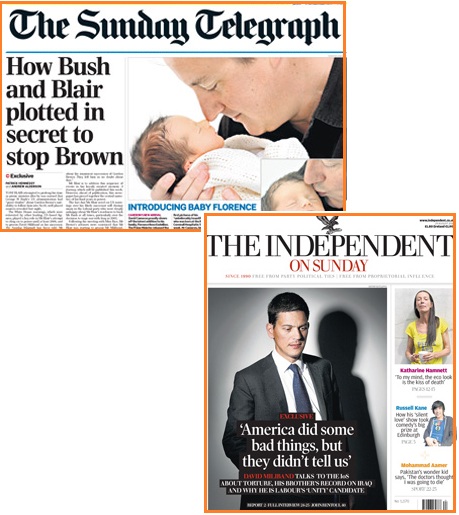 …are these headlines helpful to the younger brother?

With voting in Labour’s election due to start on Wednesday two papers at the “quality” end of the market have front pages that are dominated by the relations between the US and the UK during the Iraq War and its aftermath.

The Telegraph says that it has been told that Tony Blair sought to hang on to office for longer than he did after hearing concerns from President Bush about the suitability of Gordon Brown to succeed him as Prime Minister.

It reports: “..Senior officials in the US administration sounded the alert after a meeting between Mr Brown and Condoleezza Rice, Mr Bushâ€™s secretary of state, in which Mr Brown â€œharanguedâ€ her over American policy on aid, development and Africa. After the uncomfortable session, sources said she reported her misgivings to the White House, and they were sent on in turn to Mr Blair” who then sought to remain in office until 2008.

The front page of the Indy on Sunday looks at the suggestions that leadership favourite, David Miliband, was complicit in the torture of US “war on terror” suspects in the period when he was Foreign Secretary. This is something that has his dogged his campaign though I’m not convinced that it will be that important

On top of this there’s a perceptive feature in the Observer by Toby Helm in which he suggests that the contest gives the Labour movement its chances to give its verdict on the whole New Labour project. And if it turns into that then maybe it could hurt DM who is seen, perhaps unfairly, to be the “Blairite” contender.

But is this election about ideology at all? Labour, surely, will choose the Miliband who is seen to offer the best prospect of returning the party to power.

This long bank holiday weekend was always going to be crucial in this contest. The postal ballot packs go out on Wednesday and all the evidence is that many voters like to fill them in quickly and return them. By next weekend the election could be over for a significant segment of voters.

Meanwhile the betting on the brothers remains very much the same with DM’s Betfair price being 1.44 and EM’s being 3.55.