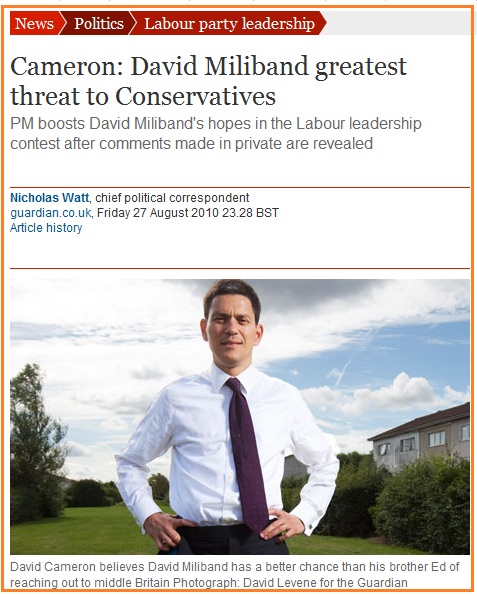 Just four days to go before voting starts in Labour’s election the Guardian is reporting that the contender that David Cameron fears most is David Miliband.

Now how should we treat this? Is it on the level; is it a bluff or is it a double bluff? Could Number 10 be trying to impede DM’s chances by letting it be know that they fear him most?

We all remember Alistair Campbell playing games like this during the 2001 Tory leadership contest. It was put about that Ken Clarke was the man Number 10 wanted when in fact he was the one they most feared. What happened? The Tories made their most disastrous leadership choice ever with the hapless IDS.

Now could it be that the Cameron team really does fear Mili-Major the most and that it’s been concluded that the best way of blighting his chances is to let this story slip out? In this scenario they hope that the Labour movement will think it’s a trick and back the younger brother.

Who knows? The best thing with reports like this is to treat them with a very large pinch of salt.