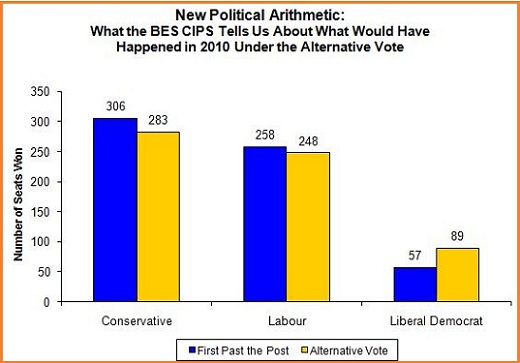 Would it have taken away the “TINA defence”?

Those old to remember the Thatcher years will recall what came to be known as TINA – “There is no alterative” – her refrain when her policies were challenged. Well I wonder whether TINA has returned as the fact of the coalition continues to dominate the political debate.

My guess is that these seat numbers will start to be regarded as the “official” projections of what the impact of a new voting system would be and will be referred to time and time again.

As can be seen the big losers would have been the Tories and the big winners the Liberal Democrats the winners. Labour are down but only by ten seats.

The big element, of course, is that the 283-248-89 total would have meant that both coalition possibilities, CON-LD or LAB-LD, could have led to viable governments. A CON-LD pact would have produced a majority of 94 whilst with LAB-LD it would have been 24.

In those circumstances the task for the Tory negotiators would have been enormous and my guess is that the yellows would have gone, after some hard bargaining, with Labour.

For the main argument in favour of the current coalition deal was TINA – that the seat numbers for the alternative simply did not add up. A CON-LD arrangement was the only one that produced a viable government and during that high octane weekend that was the imperative. Those TV pictures of the Greek riots had a big influence.

This is, of course, a counter-factual but one that could be highly relevant in the current AV debate.