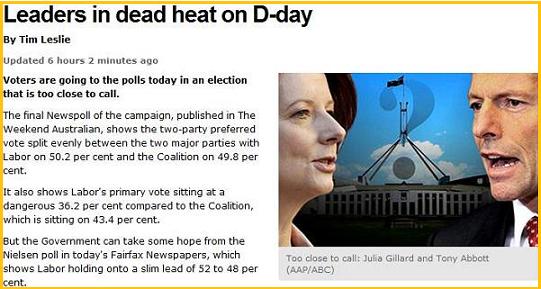 Could this cliffhanger election be heading for a hung parliament?

The babies have been kissed, the staged events are done, the former leaders have made their cameo appearances (the knifing of Rudd the “elephant in the room” for Labor), and the psychic animals have had their say (the octopus and crocodile for Gillard, and the snail and spiny anteater for Abbott).

It’s been something of a scrappy campaign, and rather a strange one – indeed it’s been described as a “battle between two Oppositions”. What is clear is that Liberal leader Tony Abbott has outperformed many people’s expectations, and may even be in with a chance of an unlikely victory, although most commentators are expecting a very narrow Labor win, but with the distinct possibility of a hung parliament.

Labor look set for significant seat losses in Queensland (due to the dumping of homestate PM Rudd) and New South Wales (a very unpopular state Labor government), but may scrape over the line thanks to gaining the odd seat in Gillard’s Victoria base and possibly South Australia.

Polls will close at 6pm local time, thus 9am UK for the eastern states and 11am for Western Australia, and although as with American elections many seats will be called on election night, if the election is very tight the result may not be known for a week or so. Like most countries outside the UK, votes will be counted at polling stations (“booths” in Australian parlance), but it will take some days for all of the postal ballots to arrive, which are valid if posted on election day.

Special thanks to Alexander Drake for his articles during the campaign, and for offering his insights on Australian politics. We may get updates from Alexander as election night unfolds.