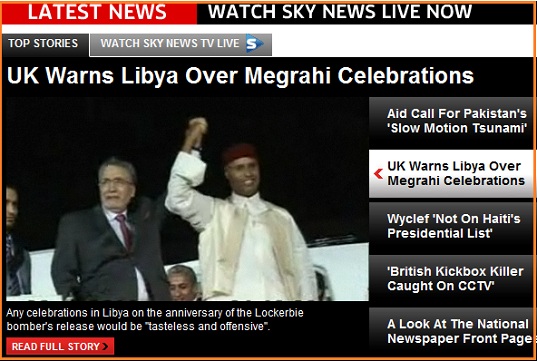 What could it do to the SNP’s re-election chances?

It’s exactly a year ago today that the man convicted of the Lockerbie bombing, Abdel Basset al-Megrahi, was freed on compassionate grounds by the SNP-led Scottish government after receiving a doctor’s report saying that he had only got three months to live.

We all remember the row and how it has continued to erupt as we saw during David Cameron’s visit to Washington last month.

One report today suggests that the SNP might have to get used to these anniversaries – for it’s said that Megrahi could survive for another seven years. That, to say the least, is somewhat at variance with the medical advice on which last year’s decision was taken.

The SNP are clearly sensitive about the matter and last night issued the findings of a poll of Scottish voters commissioned and paid for by the party from YouGov. Interestingly this didn’t ask whether the release decision was correct – rather it focused on the US senate investigation.

The YG polling panel split 72-20 on this “Abdel Baset al-Megrahi was convicted of the Lockerbie bombing in 2001. In 2009 he was released by the Scottish Government’s Justice Secretary on compassionate grounds, having been diagnosed with terminal prostate cancer. US senate committee invited representatives of the Scottish government to appear before their committee to explain their decision. The Scottish government declined to attend, on the grounds that they are accountable to the Scottish Parliament, not to US politicians. Do you agree or disagree with Scottish governmentâ€™s decision not to attend?”

I am sure that I am not the only one to think that the form of the question is far too long and is leading.

The big political question is how this is going to impact on next May’s elections to the Scottish parliament. In 2007 the SNP came out as top party and since then has ruled as a minority. Will a resurgent Labour party win back power?