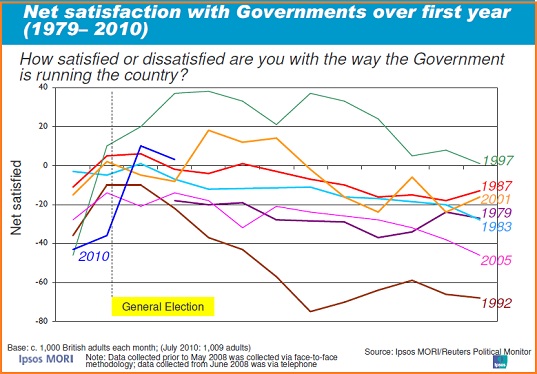 Will the cross-over happen by Day 100?

This is a week that’s going to be full of symbolism for the coalition government.

Firstly in midweek it will reach the 100 day mark which is always a point for reflection and assessment and already we have seen the media using the peg of this milestone to start looking back.

Secondly David Cameron is on holiday in Cornwall leaving his deputy, the Lib Dem Nick Clegg, notionally “in charge” whatever that means. Certainly that’s getting coverage this morning.

And thirdly the opinion poll ratings on the public’s, or at least that select group who are members of the YouGov polling panel, view of the government might reach a cross-over point with more being negative than positive. In recent days it has been hovering at the plus one point suggesting that we are not far from negative numbers.

To put this all in historical context the pollster that’s been asking the satisfied/dissatisfied question in the same way for more than three decades, Ipsos-MORI, recently put out the above chart showing net government satisfaction ratings in the first twelve months after every general election since Mrs. Thatcher came to power in 1979.

As can be seen the only government that managed to enjoy positive ratings throughout the first year was Tony Blair’s following his 1997 landslide.

His 2001 government started out with negative ratings but got a temporary boost in the period following the attacks on the Twin Towers and the Pentagon on September 11 of that year.

The incoming Tory government of 1979 went into negative territory right from the start while it did get a short term boost after being returned to power in 1987.

So this period since the election while the government has been ahead is quite unusual and almost certainly is not going to last.

Do these ratings mean much? Well they are an interesting indicator but they are nothing like as good in predicting general election outcomes as the Prime Minister’s approval ratings. For the time being at least Cameron is enjoying healthy personal numbers.