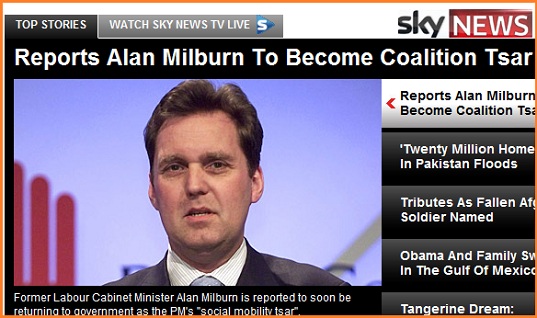 Should Labour figures be working with the coalition?

As expected there’s been a furious response from ex-Labour deputy, John Prescott to the overnight news that former arch-Blairite cabinet minister, Alan Milburn is possibly going to return to government to act as “Social Mobility Czar” – whatever that means.

Prezza Twittered: “So after Field & Hutton, Milburn becomes the 3rd collaborator. They collaborated to get Brown OUT. Now collaborating to keep Cameron IN”

For the three Labour figures named were all opponents of the Gordon Brown premiership which makes it easier for Prescott to condemn them in this manner – though I do wonder whether the term “collaborator” is taking tribal politics a bit too far.

Whatever ministers might say getting that sort response from Lord Prescott is part of the plan. Just as Gordon Brown sought to bring in figures from other parties in 2007 the coalition move here makes Labour furious and undermines them a bit – more tribal politics.

You can see why Milburn is, if the reports are correct, doing it. Social mobility is an area in which he has a special interest and, indeed, he carried out a similar role for a time for the Labour government.

Whether he’ll have an impact we’ll have to see.