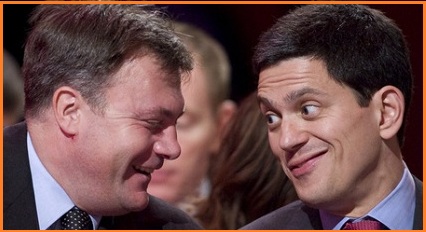 Does DaveM want to tie his hands on his shadow cabinet?

Following yesterday’s overwhelming decision by the UNITE union’s national policy committee to endorse Ed Miliband for the leadership the focus has turned to Ed Balls and his continuation in the contest.

Without the backing of the biggest union and the one he’s been most associated with it’s hard to see how he can clinch the prize at the end of September.

Would a better course now be to pull out and say he is backing the long-standing front-runner, David Miliband? In return he could choose his own shadow cabinet position.

But this creates a dilemma for the older brother that was summed up brilliantly by the Times’s Danny Finkelstein in a Tweet – “David M could clinch leadership by offering Balls Shadow Chancellor. But doom leadership too. Quite a dilemma.”

The trouble is that such an arrangement would revive memories of the Blair-Brown rows that poisoned the movement for a decade and half. The reason, surely, for Balls’s performance is because of his close association with one half of the old regime.

Labour wants to move on and having its new leader “in hock” to Brown’s former right-hand man could make that more difficult. In any case the environment between the Treasury and Number 10 that he helped his old boss to create is the last thing that DavidM wants.

I’ve little doubt that a Ballls withdrawal followed by a DaveM endorsement would be exploited ruthlessly by his younger brother.

In the betting the EdM price has tightened. The Ladbrokes EdM price of 7/4 is the best from a traditional bookmaker.