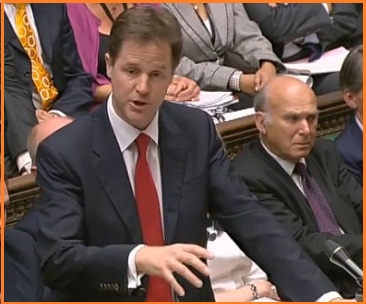 Is the government still not thinking like a coalition?

Last week, the Lib Dem Secretary of State for Business, Innovation and Skills, Vince Cable, proposed a Graduate Tax as an alternative means of funding higher education to tuition fees. This week, unattributed Tories briefed against it with the result that the proposal is now unlikely to prosper.

Leaving aside the merits or otherwise of the tax, the process tells us a lot about how the government is working (or in this case, not working). All governments benefit from being able to discuss options freely behind closed doors before deciding whether to go ahead with a particular policy and how. Ideally, pitfalls are identified and avoided and the government agrees a line all its members will take.

In practice, cabinet government hasnâ€™t really applied within the UK since 1997. Both Blair and Brown preferred – and were able – to operate presidentially, agreeing policies bilaterally with ministers and the other cabinet members accepting that theyâ€™d have no say. It reduced the risk of leaks and â€˜splitsâ€™ but at the cost of reducing scrutiny of policy and increasing initiative-itis.

What the Graduate Tax episode shows is that the current government is also prone to operating in the New Labour model. For a coalition, thatâ€™s even more dangerous as the government now covers much more ideological ground than the individual components and what might be acceptable within one may well not be acceptable to the other – which is what appears to have happened. A cabinet paper and discussion should have allowed those within government to see that it was a non-starter without publicly riding up to the top of the hill and back down again.

A second rapid reversal came in a different form, when Nick Clegg referred to the â€˜illegalâ€™ Iraq War at PMQâ€™s, which No 10 rushed to assure anyone asking that those were Mr Cleggâ€™s private views and not those of the government.

There have been similar examples of Tory ministers acting similarly single-handedly. Michael Goveâ€™s Academies bill has been rushed through parliament in two months, introduced almost as soon as parliament met after the election and with very little debating time in parliament. The bill was no doubt worked out in detail before the election but that would reinforce the point: it would be a purely Conservative piece of legislation. That itâ€™s passed without much comment from the Lib Dems – even an insistence that parliament debate it properly – shouldnâ€™t mask the fact that the checks and balances necessary to keep a coalition together canâ€™t have applied there.

Ministers resigning on a point of principle have become rare in recent years but the nature of a coalition makes the prospect more likely than it would otherwise be; the principles held cover more ground and thereâ€™s more scope for disagreement. The traditional way to control that risk is to allow everyone their say so that all have bought in to the collective decision (though with the Lib Dems so outnumbered in cabinet, the solution has to be more than a discussion and vote as they could always be outvoted).

For the government, life is almost certain to get tougher as spending cuts bite. That makes the need for self-discipline on the part of both ministers and party leaders all the greater. By and large, the coalitionâ€™s done pretty well on that score but thereâ€™ve been more than enough examples this last week alone to suggest that itâ€™s by no means yet a universally accepted or instinctive way of working. If the coalition is to work, it will have to become so.