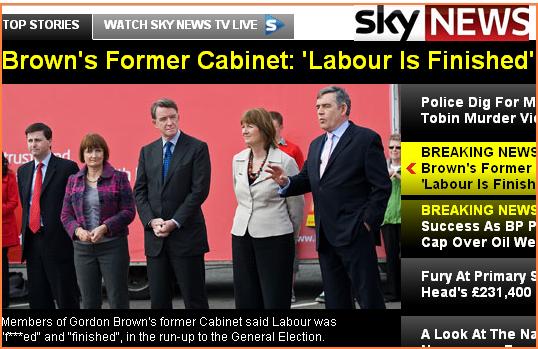 According to the SkyNews today’s extract in the Times from has this description of a general election planning meeting from last October.

He also reveals that Mr Alexander thought Mr Brown lacked the “skill-set” to be Prime Minister and that Mr Darling said Labour would lose if he remained in charge…..”

All this raises a lot of questions – particularly of Mandy. For it was he, it will be recalled, who kept the Brown show on the road a few months earlier after the cabinet resignations at the time of the June 2009 elections.

This is all about the past but a key revelation that could hurt Mandy’s party in the coming weeks and months is that Alistair Darling was pushing for an increase in VAT in March but was over-ruled by Brown. This is how the Guardian has it.

“..Mandelson writes that Brown and Darling rowed over economic strategy. He “vetoed point-blank” a proposal from Darling to raise VAT up to 18% or 19%. The then chancellor then blocked a proposal from Brown to rule out VAT rises under Labour in the course of that parliament.

Mandelson reveals how Darling raised concerns about the fiscal deficit. At a No 10 meeting the then chancellor told Brown “we cannot just borrow more to pay for frontline services”. Brown replied by saying that economic growth would reduce the record fiscal deficit.

The memoirs relate the tense discussions as Mandelson, Darling and then Ed Balls finally persuaded Brown to acknowledge there would have to be spending cuts. When Brown used the words in a speech to the TUC, he turned to Mandelson and Balls and asked: “Well, are you satisfied, all of you?”

A lot of this is going to be thrown back at the red team as they seek to oppose the Osborne budget strategy and the cuts.

As yesterday the most comprehensive non-paywall account of the book is in the Guardian.

In total. like yesterday, the revelations are really just tittle-tattle and don’t add very much. What they do is diminish Peter Mandelson. Maybe the Times was hoping for more when it bought up the rights?

UPDATE: I have changed the headline so that it does not now include the full F-word as spoken by Chancellor Darling.