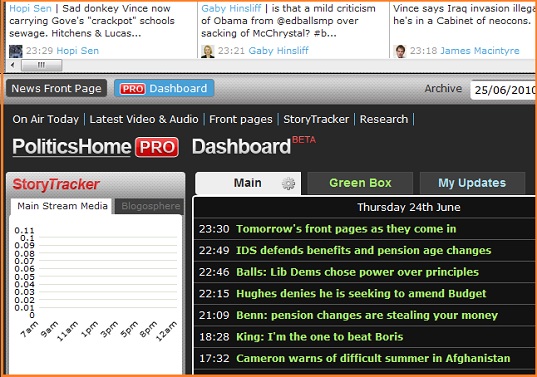 Guido had a good piece overnight on what’s happened to traffic on the Times site since the pay wall came into operation. For even though you can still get on for nothing during the “preview” period the numbers of hits its getting has dropped sharply.

Heaven knows what will happen when the Â£10 a month charge comes in for there is a big issue as well as the cash. The site has gone through a major re-design where the emphasis has been on what it looks like rather than usability. I simply can’t be bothered learning to navigate it.

On top of this stories from the paper no longer feature on Google news search engines. So for me, like many others, the Times has simply ceased to exist.

But is the same going to happen with one of the country’s most popular politics sites, PoliticsHome, that is going behind a paywall on July 12th in a completely separate development?

Initially this was promoted as a Â£195 a month service with big discounts for those who signed up early. I don’t know what happened to that because I’ve continued to get the beta version of the “Pro” service for free.

Now there’s a “PoliticsHome Lite” offering at Â£19 a month that starts on July 12th and users have been told that there will be no free access after that date.

The site’s main role is as a news aggregator so you can spot immediately what’s happening both in the media and on the blogs. It’s updated frequently and I visit several times a day. It’s particularly good at highlighting the best political comment pieces and monitoring TV and radio programmes.

But is it going to be worth the money? I don’t know but it has massive competition now from Twitter and, of course, sources like PB threads.

My initial plan is to see if I can get along without it.