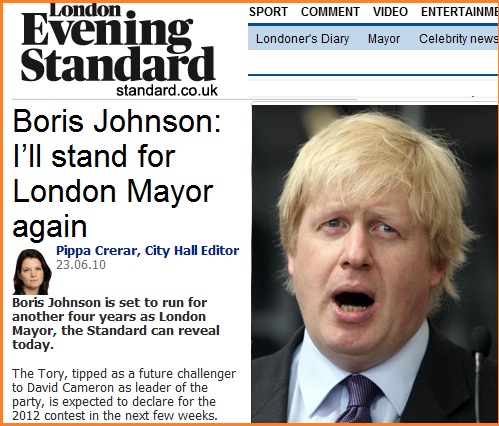 Who’ll be the new favourite as Cameron’s successor?

The big news in London politics this lunchtime has been that Boris Johnson has ended the speculation and announced that he will be running for a second term as Mayor in 2012.

For, amazingly, given he’s not been an MP since 2008, Boris has become the favourite to take over from David Cameron. I could never quite work this one out but PaddyPower have him at 3/1 while with Ladbrokes he’s at 5/1.

To me there were just too many obstacles for this to be possible. The timing of the London election didn’t help because it was hard to envisage Boris stepping down in 2012 only to have to wait until 2015 to get back into parliament.

In any case, as Michael Poritillo will no doubt tell you, it is quite hard for an MP returning after an absence to make an impact amongst fellow members of the parliamentary party.

So who should we be backing? I don’t know but there’s one betting rule that we should always remember – the early favourite NEVER wins Tory leadership contests.

Labour is choosing its London candidate at the moment and it’s hard to see beyond Ken Livingstone.