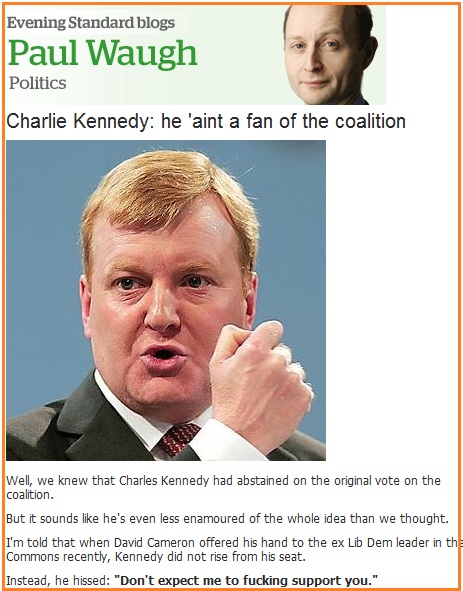 Could the ex-leader vote oppose the coalition budget?

Reproduced above is part of a piece that was posted last night by the Evening Standard political writer, Paul Waugh.

Clearly Kennedy, who was leader of the party until being forced out in the first week of 2006, is not a happy bunny. He is certainly no fan of the coalition – a view he shares with another former leader and one of those who ousted him, Ming Campbell.

As Waugh reports Kennedy was the one prominent Lib Dem who refused to back the deal during that pressurised period in the days that followed the general election.

The easy solution would be for Clegg to encourage Kennedy to quit the party that has been so much part of his life for so many years.

But Charlie does perform a vital function – he’s a constant reminder to Cameron, Osborne & co about how far they can push their coalition partners.

He has a similar role to those on the Tory right who are far from happy about the situation that they are in.

The politics of the coalition are about steering a course that keeps it together. Today’s budget will be its most critical test.