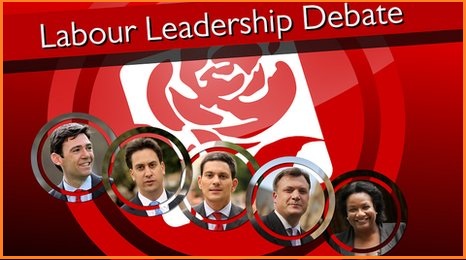 Richard Darlington on the New Statesman blog has a good trailer for tonight’s Newsnight debate with Jeremy Paxman in the chair.

It takes place in front of an audience of swing and former Labour voters and their reaction could play a key part. For unlike the sterile rules of the General Election TV debates the audience are able to cheer and show their disapproval.

To my mind this is the big opportunity for Diane Abbott to show how she’s head and shoulders about the other four when it comes to communication. Darlington has it like this:-

“..Abbott probably has more TV experience than any of them because of her weekly This Week slot. And we shouldnt forget that David Miliband’s campaign made a conscious decision to give her the nominations she needed to get on the ballot paper. Time will tell whether that was a politically strategic master stroke or New Labour’s final blunder..”

In the betting David Miliband is still the odds on favourite while Mili-Minor is in second place. The others are a long way behind.

But given how those events affected the whole general election campaign then there’s little doubt good or bad performances tonight by one or more of the five will have an impact.