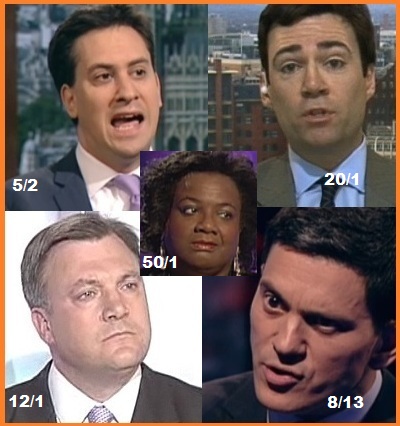 Will it be a four, five or six horse race?

Today marks the final scramble for the three remaining Labour hopefuls who have yet to make the cut to secure the required 33 nominations from fellow MPs.

Andy Burnham is just two off and looks a near certainty.

John McDonnell has sixteen so might struggle – though will he be helped or hindered by his regret at not murdering Mrs. Thatcher in the 1980s? Judging by the reception he got when he made the remarks it could help him.

This leaves Diana Abbott who has secured the support of the party’s acting leader, Harriet Harman to bring her total to eleven and is the only woman to have put herself forward. No doubt there will be a lot of activity around her position in the next few hours.

Will McDonnell ask his nominees to switch to ensure that there is a woman on the list or could other MPs be persuaded to move to the Abbott cause?

As to the overall winner the general rule in Labour races is that the favourite wins. This contrasts with the Tories where the early favourite is almost certainly doomed.

It’s that experience more than anything that keeps me on David Miliband.

In the nomination betting Abbott is currently a 55% chance.