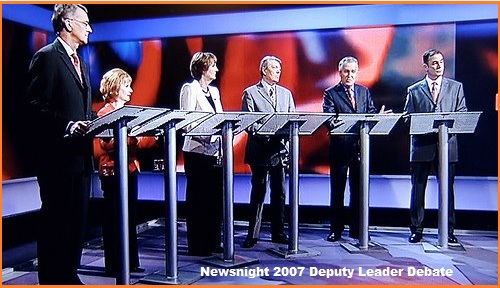 It’s a good political trivia question. Can you name the six prominent Labour figures who fought for the deputy leadership of the party in June 2007? They are lined up above for the deputy TV debate.

They were, of course from left to right, Hilary Benn, Hazel Blears, Harriet Harman, Alan Johnson, Peter Hain and John Cruddas. All of them were returned to the commons on May 6 2010 and yet not one of them is trying for the top.

Did that election make them reluctant to ever put themselves forward again? Compared with the current hopefuls the 2007 contenders at least had mixed backgrounds. None went to Oxbridge and I don’t think any of them was a SPAD.

What is relevant is that that 2007 event sets the precedent for a full fledged leaders’ which will surely be crucial in the election. The events of April 2010 have made the ability to “come over well” in contests like these a core competance.

I thought having six in 2007 debate was just too many. Three or four would be ideal – five probably over the top. For the Labour movement needs to see how they interact with each other and how fast they can think on their feet.

At today’s Nottingham election post-mortem, which I’m just returning from, some interesting polling was highlighted. Before the first debate just 12% thought Clegg would do best and we all know what happened.

So I’m a tad reluctant to make a forecast for Labour’s coming leadership debate but I will – it will be Ed Balls. Whether “winning” would boost his chances I don’t know but he’s certainly going to beat expectations.