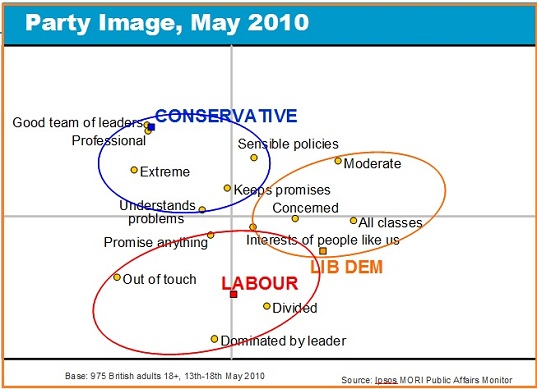 This is from some polling that Ipsos-MORI is publishing on its site tomorrow. It’s not about voting intention but perceptions of the parties that exist now in this post-election post coalition deal world. The key points for each:-

The Conservative party is seen to be most professional, have the best team of leaders and to understand the problems facing Britain. Its image has improved significantly on these attributes since 2006. On the negative side it is is least likely to be seen to represent all classes or be concerned about people in real need in Britain, although it has improved slightly on both of these since 2006.

The Labour party is seen as most divided and most likely to promise anything to win votes. However, its image has improved on both these respects since 2006.

The Liberal Democrat party is felt to best represent all classes and be most moderate. Along with the Conservatives, it is felt to have the most sensible policies.

Given the massive shake-up in the system that we’ve seen and the prospect of a new Labour leader I wonder how this will all look in a year’s time.

One of the great things about Ipsos-MORI is that it does ask the same points in the same manner consistently over the years and it is possible to track changing perceptions.